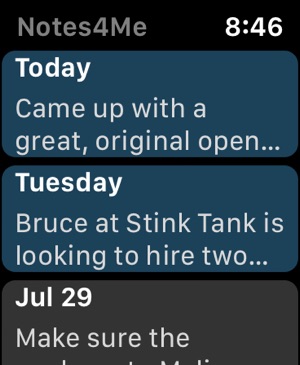 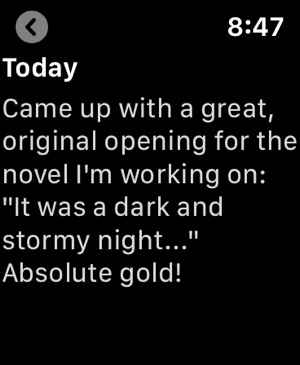 We all make those little notes to ourselves. Whether it's an idea we want to explore or a phone call we need to make, we jot it down on whatever scrap of paper is readily available with the hope we'll be able to find it later. This is where Notes4Me comes in. It's designed to make creating and finding these notes as quickly and easily as possible. Just fire it up and start typing away. Think of it as a holding place for your thoughts until you have time to act on them. Notes4Me also makes it easy to move notes elsewhere if you need to take that initial idea and develop it into something larger. Key Features Include: • Sync your notes between Notes4Me on your iPhone, iPad, and Mac with iCloud. • View your notes on your Apple Watch. • Recognizes addresses, links, phone numbers, flight numbers, tracking numbers, and other information. Just tap on them to get directions, make a phone call, etc. • Pin important notes to the top of the note list. • A Today View widget so you can see your top notes in the Today View. • Share your notes with other apps and people using iOS's built-in share sheets. • Send To Notes4Me extension for sending notes to Notes4Me from within other apps. • Add notes to Notes4Me using Siri by saying, "Hey Siri, create a note with Notes4Me..." • Drag and drop notes between Notes4Me and other apps on the iPad. • Support for Split View and Slide Over on the iPad so you can have Notes4Me and another app on-screen at the same time. • Support for Dynamic Type. • Keyboard shortcuts when using an external keyboard. more